Can Fintech Startups Survive Without Funding?

Written by Mateusz Lukaszewski on May 2, 2017

We are sharing everything
on our journey to 10, 000
visitors.

We’re learning a lot
so you will too.

What can Fintech startups do when they have no capital? Not much.

And nearing the end of 2016 one could definitely feel stagnation in Fintech investments. But it’s not all bad. Actually, emerging global market trends seem to indicate that Fintech startups are entering a golden era in terms of available support from investors.

The top Fintech startups in 2013 were personal finances, business and consumer loans and compliance or security measures for financial institutions. Artificial intelligence, Machine Learning and Big Data seemed to be the top technologies that start-ups and investors were interested in (source: American Banker).

And at the end of 2016, Quartz suggested that Fintech investments were drying up. But the author later clarified that while it may seem like a global trend, it afflicted only a part of the market. In other parts, like insurance tech all was well – it attracted over $1 billion in the first half of 2016 only.

According to the latest data report from the United Nations Conference on Trade and Development, Global Foreign Direct Investment (that is: in the form of a controlling ownership in a business in one country by an entity based in another country – definition) had stalled in 2016 and is supposed to resume growth in 2017, then surpass $1.8 trillion in 2018.

Which sounds good. So why was the UNCTD’s overall conclusion so pessimistic?

“Expectations about short term FDI flows are best described as mildly pessimistic. FDI will decline in both developing and developed economies”

So what’s the real answer? Is it possible to say whether global Fintech investments will grow in 2017?

Let’s take a look at the latest data (starting with second half of 2016) and try to determine the trends that will drive Fintech capital in 2017.

The Great Startup Boom in India and Africa

India has become the third largest tech startup hotspot in the world. It currently has more startups than Israel and China. However, with only 4,400 tech startup products on the market, it’s still a long way behind the US, which leads with over 47,000 such products.

Growth has been largely attributed to the Indian government’s “Start-up India Initiative”.

Indian startups are breaking into the big time – with one of them, Flipkart, recently taking the 9th place among 10 of the most valuable venture-backed private companies in the world. (source: WEForum) 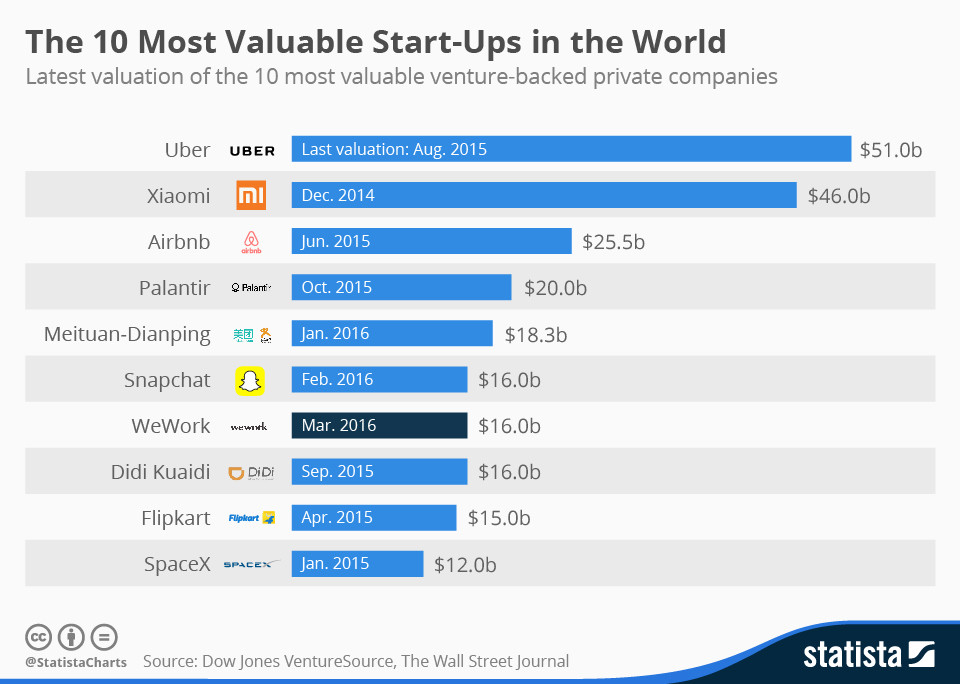 Flipkart is an indicator of the most clear trend in Indian startups – which is ecommerce. Which might be good for Fintech, as growth of Fintech startups has been highly correlated with growth of ecommerce platforms in the past (take PayPal and Ebay for one example).

Moving on a bit to East – what about the African startup boom? In 2016 the African Tech Startups Funding Report found that fintech acquired $55 million (29.6%) of total investments in African startups. And there’s still room for growth, given that 80% of African people have no access to traditional banking services. (source: Finextra)

To provide some recent examples – on the 19th of December, 2016, Nigerian payment operator Paystack announced the acquisition of $1.3 million in investment. (source: Black Enterprise) On the 19th of January, 2017, Delhi-based startup Connaizen raised an undisclosed amount of investment in order to go live with the top 5 private banks in India. Another, Gumption Labs, secured $50,000 as prize for a 3 month program for Fintech ventures. (source: Iamwire)

So it seems that developing markets, struggling with problems like the recent monetary debacle in India and obstacles typical to developing markets, have received a large inflow of capital to help tech startups prosper. It doens’t have to mean that the Fintech sector specifically will keep growing – that’s hard to predict.

What you can say, however, is that this data paints an optimistic perspective for future start-up growth in developing markets – or at least in India and Africa. What boosts optimism is that the biggest platforms in development are e-commerce (which foster Fintech growth), and that traditional banking isn’t as big of an obstacle in those markets as it is in the developed world.

Increasing support for fintech in Europe

In November 2016 European Commission announced the launch of a Pan-European Venture Capital Fund of Funds. The minimum is €1.6 billion in venture capital funding, with the EU providing a quarter of it and the rest being raised from private sources. That’s not all – the EU will provide a second chance for entrepreneurs with a new proposal for insolvency law. It will also simplify taxes, with proposals like the Common Consolidated Corporate Tax Base (CCCTB). (source: European Commission)

This European startup initiative also aims to foster a better ecosystem for startups to connect with trustworthy partners and aid their growth as a result. Moreover, in December 2016 the European Commission announced the creation of an internal Task Force on Financial Technology, with a goal to make the most of Fintech innovation and address the challenges of Fintech with new strategies. (source: European Commission)

As reported by the EU Commission: “The Task Force brings together the expertise of Commission staff across several areas, such as: financial and digital services, digital innovation and security, competition and consumer protection. It will also engage with stakeholders and present policy suggestions and recommendations in the first half of 2017.”

If this support from the European Commission will go through with adequate execution and timing, Fintech startups (and startups in general) in Europe should have increasingly better access to capital and experience less obstacles in entering the market with new products.

Growth of service economy in China

An interesting trend has emerged in the East. The stereotypical view of the Chinese market is that it’s the manufacturing hub of the world – but in 2017 this is no longer true.

It hasn’t been true since 2014, the year when services outgrew manufacturing as the biggest part of Chinese economy:

“the changing structure of its economy and increased demand for education, healthcare, and financial services creates the potential to generate new jobs not only in China, but in the U.S. as well” (source: WEForum)

Changes in Chinese economy might also lead to a more open market, where startups from other countries could enter China without dealing with political obstacles still standing in their way.

The market for financial services in China has already been hit by the fintech revolution, and hit pretty hard according to O’Reilly:

So you can say that fintech is already strong in China, and there’s still room for growth in 2017 as the structure of the Chinese economy continues to morph, and new opportunities to collaborate globally open up for startups from the far East.

If there was one common concern that bank and research center representatives voiced in Fintech reports in 2017, it was that if banks don’t learn to communicate and cooperate with Fintech, they will eventually be made irrelevant by advanced technology and simplicity of financial services offered by startups.

So rather than wait for the markets and consumers to turn to new “competitors”, the most progressive institutions already see Fintech startups as “allies”.

Banks continue to pour large capital into fintech start-ups – sometimes sacrificing their own ROI in order to stay on the edge of technology and avoid getting left behind.

According to Global Finance, plenty of fintechs are looking to be acquired, but their valuations – reaching as much as $18,5 billion (Chinese SME and consumer lending platform) – are looking to be an important obstacle in getting bought.

That’s why it’s expected that AI and blockchain will remain more collaborative – banks will work with startups, rather than buying them – while digital-only banks and P2P platforms could potentially be acquired by the banks. In other words – the part of fintech that resembles traditional banking the most, is also the most likely to be acquired.

Right now, collaboration between banks and fintech start-ups is getting stronger, and “fintechs and banks are currently in an exploratory phase, trying to develop proofs of concept and determine how they can work and move forward together”. (source: Global Finance)

In essence, cooperation between fintechs and banks is maturing, and both parties are looking for ways to extract ROI from it.

The recent global trends that could influence Fintech growth in 2017 and later on are:

1. Start-up boom in India and Africa

2. Increasing support for fintech, and start-ups in general, in Europe

3. Growth of service economy in China

And they seem to indicate that despite short term stagnation, Fintech funding continues to grow and the wheels of global initiatives are turning to make innovation easier in this complex market by simplifying regulations and increasing funding.

Now I’d like to know your thoughts on it. Agree/disagree? Let me know in the comments!

We are sharing everything
on our journey to 10, 000
visitors.

We’re learning a lot
so you will too.